Last weekend husband and I had a fun day out – shopping at the Promenade, matinee to see Django Unchained, then drinks and appetizers sitting at the bar at Houlihan’s. We love Houlihan’s and love all the appetizers we’ve ever gotten (goat cheese & artichoke poppers, chipotle chicken nachos, thai chicken wings, chicken and avocado eggrolls) but then, we got the mac ‘n cheese. Maybe we were just reaaaally hungry, or maybe it was as good as we thought it was, but we vowed we were going to re-create it.

So here’s our version, and boy did we come pretty damn close. Enjoy. 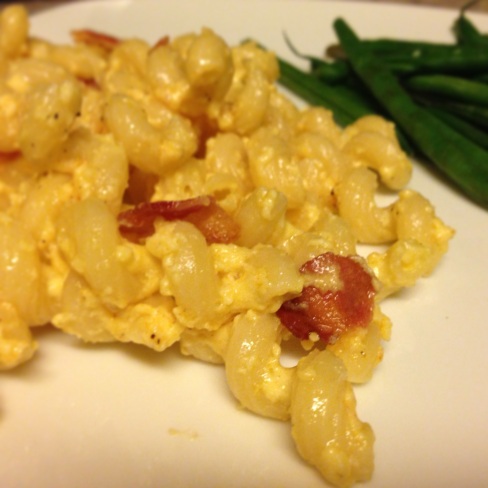 In a large pot of boiling water, add the noodles and cook until just before done. Don’t over-cook the noodles or this will end up mushy.

Drain the pasta, return the pot to the stove and cook the bacon until crispy, remove from pot and allow to cool.

Drain off bacon grease and return drained noodles to the pot.

In a separate bowl, add the egg and sour cream, beat until well combined.

Add the butter and the egg mixture to the noodles and return to medium heat. Stir until the butter has melted.

About 1/4 a cup at a time, add the cheese. Stir until cheese has melted before adding more.

This entry was posted on January 3, 2013 by milledavis. It was filed under Recipes and was tagged with bacon, houlihans, mac and cheese, macaroni and cheese, recipe.