Welcome back to the second part in my series The Ship List. Yesterday, I shared My Top 10 Ships of All Time, and today I’ll share my equally TV-obsessed friend Samantha’s list.

Now, in my post, I said our friendship depended on how much of our list matched. Welllllll, we only have 3 matches. But you know, I think that’s a good thing. We broaden each other’s TV horizons, and will now have a really great SHappy Hour: shipping happy hour where we discuss the merits of the couples on our lists. Samantha suggested it consist of pizza, beer and access to a TV to show our favorite ship moments. Sounds like a perfect night to me, and possibly material for a Ship List, Pt. 3.

Warning: Some spoilers below.
Second Warning: Time commitment to this post is on par with what you would spend on a short novel. All commentary below is from Samantha. You might say she struggles with being concise.

Samantha’s Top 10 Ships of All Time

This here is the strange situation in which this couple is on my list of favorites, yet their show is not.  I was shocked by how low my enjoyment level of Veronica Mars was, and I think that stemmed from the fact that the only reason I started watching was because of the fascination I developed for Logan and Veronica, a.k.a. LoVe, from watching YouTube compilations of their best moments.  Why would I watch YouTube compilations, question one, and why of a couple I had no knowledge of, question two?  I’m not sure how to answer either, but I figure if a few video clips of two people’s interactions are enough to make me commit to three seasons of a show that, in reality, they are only together for maybe 30% of the run, they deserve to be on the list.

SPOILER ALERT: This couple is not endgame 😦  Jackie started the show off with Kelso, and it was them on-and-off for the first four seasons, then shockingly, when the fifth season starts up, there are Hyde and Jackie make-out seshs.  WHAT IS HAPPENING??  It was an unexpected pairing, but definitely not unappealing.  While it was funny to watch Jackie, so petite and cute, order clueless Kelso around, I always did enjoy having her try the same with Hyde, or Steven as she and only she called him, and have him fight back.  It was constantly pointed out that they had such little in common, but as seen in the picture above, they both share a strong “bitch face” game.

Many of Finn and Rachel’s best moments occurred while communicating through song, I couldn’t not be a fan of them even if I tried.  Plus, it was another instance of an awkward, overzealous girl nabbing the guy, points!  I do think this relationship mellowed Rachel out some (if only a liiiiiiiittle), and Finn felt more free to be himself, which seems like a better alternative than being told by his ex-girlfriend that he impregnated her by getting too “excited” in a hot tub.

7. Zack and Kelly – Saved By The Bell

Ohhh, Zack Morris…  He had a very heavy hand in developing this whole boy-girl thing for me.  His hair (which I later tragically learned was dyed) and face were just so magical!  And Kelly was his equally perfect female counterpart.  The depth of this show was severely lacking, not to mention my English was still in development during the height of my obsession, so there’s not much to say in terms of the obstacles they faced or the connection they shared, but DAMN were they pretty.  This show made me think the perfect prom was at a picnic table with a banner saying “Samantha + (insert perfect male suitor name here)’s Prom” placed next to it.  Also, stupid no-last-name-having-college-creep-girlfriend-stealing Jeff is the stuff villainous nightmares are made of.

This is an unexpected, dark horse on my list because it didn’t immediately jump out at me, and while I really liked Parks and Recreation, I only just watched it recently, cramming 6 seasons into 4 months so that I could be caught up in time for the final season.  However, given that romantic relationships weren’t this show’s central focus, the amount of happy tears that I shed for Ben and Leslie is startling.  I got misty-eyed when they got back together, when they got engaged, and obviously when they got married.  Neither of them were particularly smooth or people who kept their cool, but to each other, they were freaking Casanovas.  Plus, though I don’t think my penchant for planning or sometimes obsessive nature is as extreme as Leslie’s, it was comforting to see that she got someone as adorable as Ben. 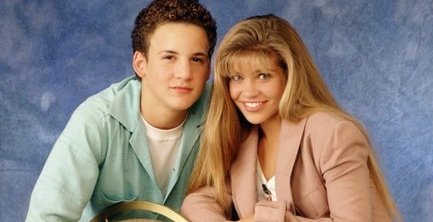 Cory and Topanga’s story provided maybe the most unrealistic expectations of love, but don’t anyone dare point that out to me.  The show started when they were 11 so there wasn’t much romantic tension in the beginning, and throughout the show’s run there would be several versions of their relationship’s origin story, but the total evolution of a first love was incredibly sweet, yet never felt sappy.  The show gave the characters some overly eccentric qualities as its run continued, and while it sometimes made Cory a little too crazy, I like to think of it as the total weirdness that is revealed when a relationship is the real deal.

Another rare non-high school couple on my list, as well as the only show that is actually still airing!  Mindy and Danny were almost enemies when the show started, but slowly her highly expressive nature broke through that gruff “Italian” exterior until he accepted her as not just a friend, but even began to fall for her.  Though they weren’t official at this time, the man choreographed a damn dance as her Christmas gift!  I don’t think everyone is aware of this, but that is literally the definition of love.  This last season brought some unexpected and polarizing turns in their relationship so I don’t know how I currently feel about them, but there is soft spot in my heart for Dr. L and Dr. C.

Confession: I wasn’t a Jess fan the first time around.  I couldn’t get over how Rory’s feelings for him caused her to be so mean to Dean.  But thankfully, I wised up and realized that though their beginning was messy, it was because Jess challenged Rory in a way she hadn’t experienced before, and though she tried to deny her attraction, it was inevitable.  That kind of passion can sometimes bring the most conflict – they were only an actual couple for less than a season – but it also leads to some memorable romantic moments, see their first couple kiss (another moment made even better by the song choice, XTC’s “When She Appeared”).  Plus, the fact that Milo and Alexis were a real-life couple for much of the show’s run caused my ship-dom to soar even higher!

2. Nathan and Haley – One Tree Hill

Though Nathan’s initial intentions for pursuing Haley were real shady – he only wanted to mess with her best friend/his half brother/his basketball rival – I can’t totally hate his sketch behavior.  Their first date is a fun scavenger hunt orchestrated by Brooke Davis (shout-out to Brooke, inductee of the Fictional Character Hall of Fame!), and from then we jump into a 9-year emotional journey that includes teen marriage and Haley discovering her rock star potential when she goes on tour in HIGH SCHOOL.  Amidst all this town’s improbability, sweet Naley moments were my favorite. I fell out of One Tree Hill after their high school years when everyone kept getting stalked and/or shot, but there is this one scene from the last season where Nathan and Haley are reunited after he was abducted by some Russians who had it out against a basketball player for the Charlotte Bobcats (what?).  She’s frantically running through the hospital, trying to find him.  A crowd parts and she sees him behind some glass doors.  As Florence and the Machine’s “Never Let Me Go” plays in the background, they come together and he says, “Hi, Hales.”  Oh, can you even handle it???  Always and Forever! 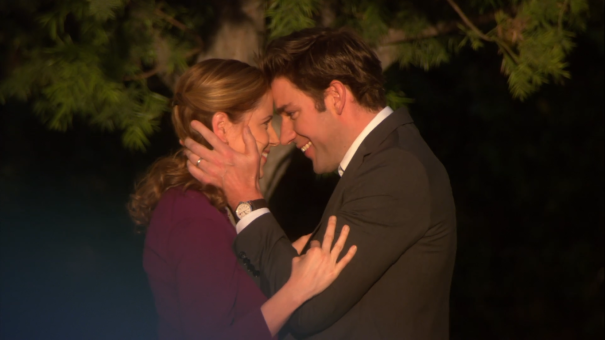 Most of the couples on my list come from the teen demographic, so who would have thought my favorite relationship of all time would be between two 20-something office workers whose days were filled with the mundane details of selling paper?  From the first episode where Pam accidentally falls asleep on Jim’s shoulder and he lets out a little smile while deciding that his crappy day has instantly become “not so bad,” I was hooked.  And given that they did not become an official couple until season 4, I lived for all the secret glances and awkward pauses that accompany silent longing.  That being said, I was THRILLED when they finally got some action going 🙂  PB&J forever!

Who’s on your list? Anyone different than ours?
xo xo