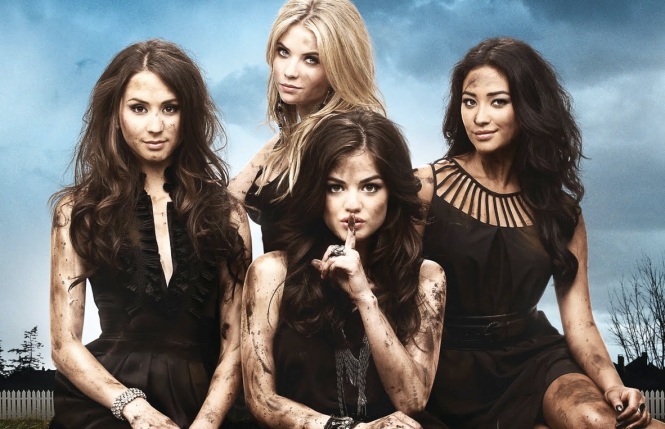 1. The fashion. Who dresses like that in high school? Scratch that. Who doesn’t wish they had dressed like that in high school? Or even post-high school??
2. Every single episode leaves me with another question and wanting more. (Case in point – the number of episodes I binge-watched Saturday, which I won’t tell you, but it was a lot.)
3. The four girls’ friendship through thick and thin (i.e. murders and swim meet championships) and their weekly gossip-fueled sleepovers.
4. Caleb is so bad boy dreamy. Fitz is so book nerd dreamy. Wren is so foreign dreamy. There’s a lot of dreamy.
5. The town square is the same set used as Gilmore Girls. (and we know I’m obsessed with anything GG)
6. Those texts from A are like a box of chocolate, you just never know what you’re gonna get.
7. It’s like Veronica Mars meets Desperate Housewives. Perfect.
8. The music change every time Jenna Marshall walks into a room and the looks all the girls immediately give each other, despite the fact that she isn’t doing anything … except walk into a room.
9. I can get my high school girl-crazy, hair-pulling bathroom fight and my front row seat to a murder investigation all in one place.
10. I don’t understand how/why this is on ABC Family, but that makes it even more scandalous.
11. Hidden lovers, hidden bodies, hidden secrets … what’s not to love??

“Only two can keep a secret if one of them is dead.”
xo xo

You might also enjoy: 10 Reasons “The O.C.” Was the Best Teen Drama Ever on TV

This entry was posted on March 10, 2014 by milledavis. It was filed under Television and was tagged with abc family, pretty little liars, television, TV.