Here’s the thing about Seinfeld …

Growing up, of course I’d seen Seinfeld reruns on TV, but I never watched many of them. I knew the characters. I knew the soup nazi and festivus, but other than that it was just another TV show.

When Hulu added the entire series, Husband and I decided we had to start from the beginning and see what the heck this show was really about. Of course, now we know, it’s really about nothing. Literally, the show about nothing. We are 5 and a half seasons in (out of 9) and here’s what I’ve realized …

I mean, I always thought it was funny when I would see reruns on TV, but it is fuuuunnnnnny. Husband and I struggle to find comedies to watch these days that make us laugh out loud consistently, but this one never fails us. I’ve talked to several people who asked, “does it really still hold up?” “is it really funny even to millennials?” YES. YES. YES. It’s easy, clean, good humor. And every episode we talk about how they bring it full circle in the most perfect way.

Okay, so we know it’s the show about nothing, but the funny thing is, since we’ve been watching the show we’ve had strange instances where we will personally experience things that we just saw in an episode. For example, we watched an entire episode about saving seats in the movie theater. Two days later, we went to see Star Wars Rogue One and I swear it was like we were playing out that episode. Another example, we watched an episode about getting lost in a parking garage (still one of my favorite eps) and a few weeks later we could not find our way out of a parking garage!

That’s why this show is so funny in such a unique way – you can relate to every episode because it’s the mundane things that happen to everyone. You laugh because you totally get it.

We just watched an episode where the person in the stall next to Elaine wouldn’t give her any toilet paper “I can’t spare a square” – I just know that will happen to me soon, and I will lose my sh*t.

How can I, a lover of all things pop-culture, not watch Seinfeld?? Seinfeld is one of those shows that everyone knows and everyone quotes and if you don’t know it, you feel so left out. Even 20 years later! At a work Christmas party someone brought a mug that said, “The jerk store called …” with George’s face on it. We clearly hadn’t gotten to that episode so I had no clue what it meant, but everyone else did. So we sped ahead and watched it and it was hilarious. Literally ONE WEEK LATER, we were in a museum in Washington D.C. and I overheard someone saying, “The jerk store called …” HA! I understood the reference! It was a proud, personal Seinfeld moment. 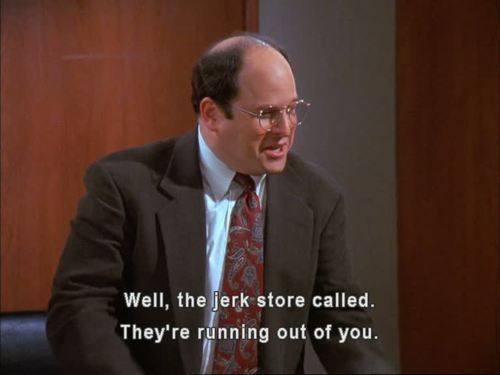 What are your favorite Seinfeld episodes or favorite quotes?

All The Tears for Parenthood

Let me start out by saying, I originally thought I was going to hate Parenthood.

In fact, Husband and I started watching it a few years ago and couldn’t get over the “realness” of it. The son is diagnosed with Aspergers in the first episode. And there was drama, and crying, and intense relationships. All things I normally love in a TV show, but for some reason it just felt too real, and I didn’t want to watch that when I was already living real life.

Fast forward to Christmas, when all my shows were on hiatus and I decided to give it another chance (sans Husband and his complaining) because a) everyone just looooves it b) Lorelei Gilmore’s in it c) I read a buzzfeed article talking about how many Friday Night Lights characters are in it d) Jen Hatmaker’s posts about binge-watching it.

So, I started. And here I am 4 months later, after watching 6 seasons, and I’m pretty sure I’ve cried more than I ever have watching a TV show. (Something Husband just doesn’t understand. Why would I want to watch a show that makes me cry?? Men.)

In honor of all my tears, good and bad, and all of yours that you definitely shed watching this show, here are my top 13 crying moments: (Of course, I cried at least once an episode, so this is 13/103)

And, I’m crying again just thinking about it. I’d say that’s the mark of a great show.
What was your most cry-worthy moment from the show?

Texas Forever, or 10 Reasons Why I Need Another Season of Friday Night Lights

Well, it happened. I finished Friday Night Lights. And I’m still crying about it.

If you don’t understand what I’m talking about, or if you are a huge fan of FNL, then you must pause and read this Buzzfeed: What It’s Like Watching Friday Night Lights for the First Time. It captures all my feels perfectly. PERFECTLY. Thank you, Buzzfeed.

I’ve blogged about FNL here along with several other TV shows about why I want to live in a small town, and here when I talked about my real Saturday, but this show deserves it’s own blog post.

10 Reasons Why I Need Another Season of FNL
[SPOILERS AHEAD IF YOU HAVEN’T SEEN THE FULL SERIES – AND IF YOU HAVEN’T, THEN STOP READING AND START WATCHING RIGHT NOW!]

1. Y’all, I need to see Tami Taylor doin’ her thing in the big leagues. You know she is totally rocking Dean of Admissions.

2. Speaking of, what is high school football like in Philadelphia?! Does it have as much heart as in the South? Probably not, but I’m sure Coach Taylor can change all of that.

3. Where is Landry?!! I’m glad we saw (two seconds) of him in the finale, but I need to know more, and does Crucifictorious have an album out yet??

4. Is Tim just sitting on his land drinking beer in his new house from now on? I need to see that he got a good job and has a life outside of Lyla Garrity.

5. Speaking of Lyla, wait, nevermind. I couldn’t really care less what she’s up to.

6. Did Vince lead the Panthers to another state championship? And where did he end up going to school? And is his sweet mom still doing okay?

7. How are Billy and Mindy handling TWINS? Does she now keep all 3 kids backstage at the Landing Strip during her shifts?

8. Did Matt and Julie really ever get married? Did he at least propose again in a more romantic place than the Alamo Freeze?

9. Just because I can’t even fathom that it’s over. I just need one more season, just one more … I’m not addicted, I swear.

10. Most importantly, I just need more Tim Riggins in my life. Period.

Why I Want to Live in a Small Town, Thanks to My Latest Binge Watches

I know what you’re thinking.

You live in Bentonville, Arkansas. You already live in a small town.

Um, no. Population 40,000 is not a small town. It’s nothing like Dillon, Texas; Bluebell, Alabama; or Stars Hollow, Connecticut.

Which leads me into my three latest binge watches (which got me thinking about small town, usa and why I want to live there):

Gilmore Girls [Stars Hollow, CT] – I re-watched the full series after my Gilmore Girls Day and just finished it about a month ago. Just as good as the first ten times I’ve seen it. Still my all-time favorite show.

Hart of Dixie [Bluebell, AL] – This was my Mille-only binge, until husband started watching and also loved it. Charming, funny and Zoe Hart’s fashion is TDF.

Friday Night Lights [Dillon, TX] – This is my current binge. So much drama, so much Tim Riggins and a new role model – Tami Taylor. I’m LOVING it.

All three of these shows are set in really small towns. [Fun Fact: Gilmore Girls and Hart of Dixie are filmed on the same set] So here are my 8 reasons why I want to live in a SMALL, small town:

1. There’s always THE place everyone goes. See Luke’s Diner and the Rammer Jammer.

2. Everyone knows everyone … and their business. Don’t worry about telling everyone about your breakup. They already know.

3. Everyone goes to all of the town events, because that’s literally all there is to do.

4. And everyone celebrates the events together – the football state championship, the anticipated wedding, etc.

5. There is at least 1 love triangle everywhere you look. There’s so much drama it’s just hilarious.

6. The parties are the best (or the most dramatic, see #5) because the whole town is there.

7. If you don’t go to either church or football games, you’re an outsider. [this one’s just as southern thing] 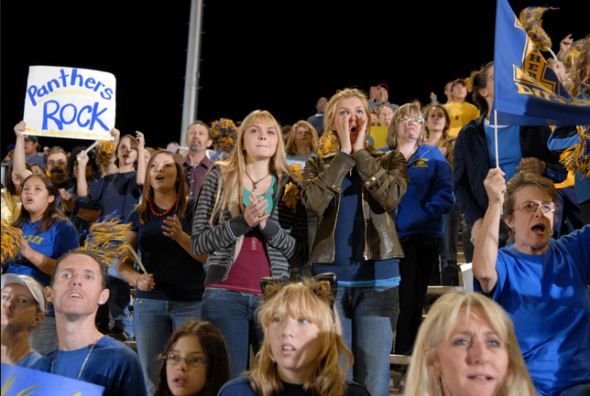 8. Though sometimes it doesn’t seem like it, when it comes down to it everyone would do anything for each other. Because really, they’re all family. 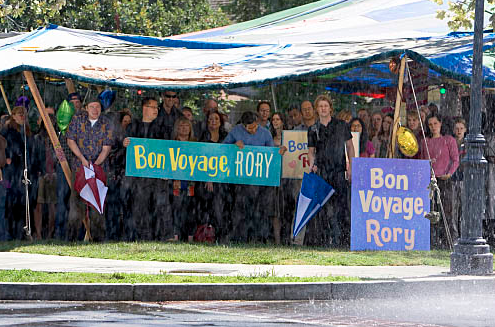 Read my other TV posts here.